Ba Be National Park , Vietnam: How To Reach, Best Time,Tips. 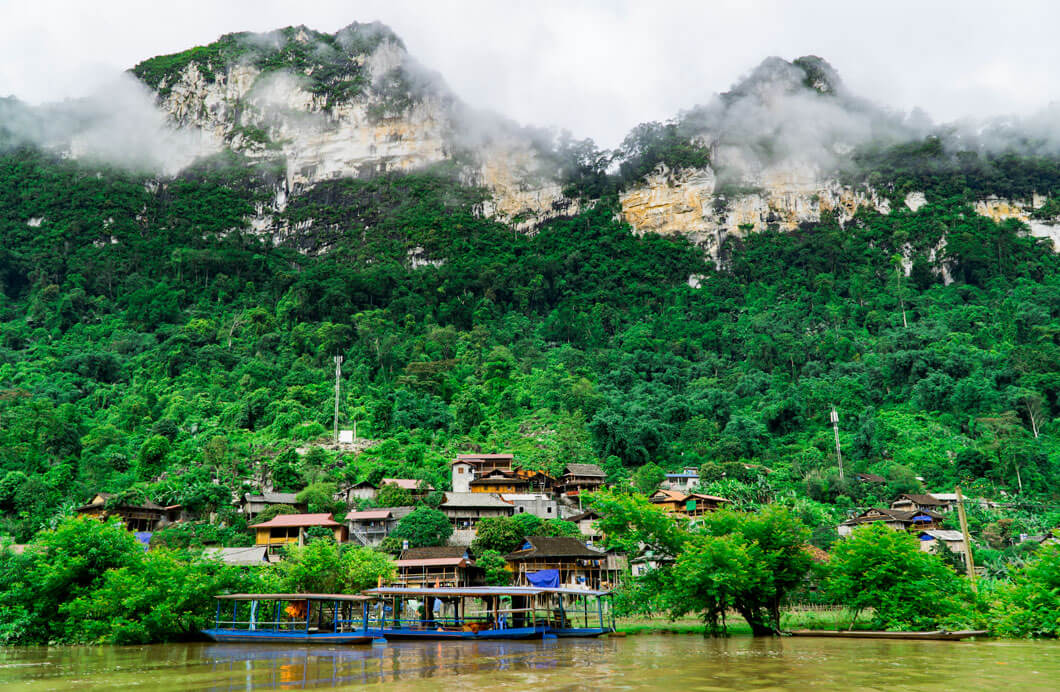 When there is a place secluded from the maddening crowd that offers absolute calm and peace, which the cities never provide a possibility for, the heart longs for such a place. A boat trip over a vast lake nestled in the cover of the green forest is everything that your mind requires to rejuvenate.

Situated in the North East part of the South East Asian country of Vietnam, Ba Be National Park offers you this breathtaking, peaceful experience through its wide variety of places such as roaring waterfalls, endless valleys, murky caves which will make you feel worth a visit. This naturally blessed place, recognized by the UNESCO as one of the important wetlands of the world.

Geographical Description & The Beauty Of Ba Be National Park

The Ba Be lake is situated in the Bac Kan province in the north-eastern part of Vietnam and is spread over 23,000 hectares, surrounded by limestone and evergreen forests. It is a conglomerate of three lakes (the name, derived from this) which are interconnected by a vast channel which is about 8 km long and 400m wide.

The three lakes are namely Pe Leng, Pe Lu, Pe Lam. This lake, located 150 m above sea level makes it the highest lake in Vietnam.Ta Han, Bo Lu, Leng get supply from this lake.  Nang River gets water from the lake during the dry season and supplies water during wet season. This is why floods in the lake occurs during the monsoon season.

The flora present over the limestone forests is mainly Tiliaceae, Moraceae and climbing-bamboo tree which is endemic to the regions along the shore.This national park serves as a home to a variety of fauna which includes 65 mammal species like Chinese Pangolin, Slow Loris, Rhesus Macaque, Francios langur as well as 27 bat species.

Furthermore, it houses 233 bird species, 43 reptiles, and amphibian species. Ba Be Lake contains 106 fish families. The park, considered to be a butterfly sanctuary where 354 species can be found.The lake is as deep as 20-25 m and the deepest point is 35 m. The bed of the lake is made up of limestone with lots of crags and crevasses.

Ba Be in Vietnamese means 3 lakes. There is a belief that the lake, formed 200 million years ago which means it is a prehistoric lake. This green cover, established as a protected area for forest and tourism activities in the year 1978. Later it was declared as Vietnam’s 8th national park in 1992.

Ethnic tribes inhabit the area and since the colonial period, many French settlements have emerged here.This region serves as a home for several ethnic tribes which include three main groups of Hmong, Dao, and Tay. They live in small hamlets that are spread around the valley and make a living by doing farming and fishing.

The tribes gather and set up a trade center on the shore of the lake to sell their products like fish, corn, rice and fruit. They also design handicrafts and sell it in the market.

Top Things To Do In Ba Be National Park

1. Dau Dang Waterfall
This waterfall, located at a distance of 3km from the lake. It acts as a border between the Bac Kan province and Tuyen Quang province. The Nang River is the source for this waterfall and the height is almost several hundred meters and 1 km long thus making it a natural grandeur.

This waterfall is a source of several kinds of rare freshwater fishes which can be as heavy as 10 kilograms. About 300 meters from this waterfall is the Na hydropower plant and Hang eco-tourism area.

2. Fairy Pond
Fairy pond, located on the top of the northern hill which is 100 m from the Ba Be Lake. Unlike the main lake, this lake is small in size. Spread at a width of 3000 m and engulfed amidst Limestone Mountains and perennial forests, this location gives you a refreshing sight and also the water in the lake is blue and cool. Here also several pricey freshwater fishes are available.

3. Widow Island
Widow Island (Vietnamese: Po Gia Mai) is a picturesque island located in the center of Lake 1 of the three lakes. The island, formed by rocks and roots of evergreen plants, makes the island look like an artwork amidst the lake water.

The name, obtained due to a folklore in which a widow was residing in this island that was the main reason for the formation of the lake. It is one of the most visited places in this region. So make sure you don’t miss it.

4. Hua Ma Cave
Hua Ma Cave, located in the Horse head mountain range in Quan commune which is 6 km southwest of the lake. This cavern was found out, renovated and thrown open to public from 2004.

Hua Ma cavern is a hung cavern which is at a height of 350m above sea level and depth of 700 m. The average height is 50m and the width is 30 to 50 cm. This cavern is cool in summers and warm in winters. The cave, dubbed the most beautiful natural cave in this region.

5. Na Phong Cave
Na Phong cave, located in Bo Lu village, at a distance if 2 km from the lake. The heart of the cave is an underground stream flowing from Nam Cong commune through the limestone range of mountains and passes through the Bo Lu village and finally flowing into the main lake.

This cave, designated as the base camp of the revolutionary movement Voice of Vietnam during the war against the French forces in the period of 1950s. It is one of the main attractions of this national park.

At Ba Be national park, arrangements for homestay done by Mr. Linh’s Homestay, located on the outskirts of the main village in a secluded ambiance. The rooms are clean, food is good and the hospitality is excellent. Bookings for the tour around the national park and village treks done here in the homestay.

Free Wi-Fi provided here. The homestay provided here is different from what you expect in homestays. This house, built of wood and situated gracefully looking upon the lake, giving you the spectacular view of the lake from the balcony.

The regularly cleaned rooms give you a good ambience and the home stay will provide clean and comfortable bedding arrangements. The bathrooms, westernized,clean and with the supply of hot water. Authentic Vietnamese food, prepared in the homestay.

The management staff is friendly and local so you can ask any queries to them as they know everything about the region and in turn, they will be also happy to help you. Altogether, this home stay is a modern-facility equipped home built in traditional Vietnamese style.

Few hotels and guest houses are available at Cho Ra or Cho Don town if you arrive here from Hanoi in odd timings.

The people in this region depend on farming and fishing for their livelihood, so the food available here is made of fresh ingredients and cooking is done in an authentic, traditional way. There are no big restaurants in this national park but the locals provide very delicious and heart filling meals.

The common dish in this region is the Lon Cap Nach, which is tender pork fry made from small pigs, raised by the locals. Other dishes are com lam, noc suong, which is also known as rice wine. You are sure to have a culinary treat when you visit. Some of the popular restaurants in Hanoi (capital of Vietnam) are:

4.Giang Café- The best cafeteria in the city of Hanoi

5.The Sidewalk Beer and Grill- you can relish delicious BBQ and refreshing beer

7.Puku Cafe and Sports Bar- A pub which serves cuisine round the world and is vegetarian-friendly.

How To Reach Ba Be National Park & How Much It Costs:

Ba Be National Park is located at a distance of 210 kilometers from the capital city of Hanoi. There are certain modes of transportation you can choose from in order to reach this place. They are:

Car transfer: Car transfer services, provided by Mr. Linh’s adventures, an established service provider, who has unmatchable expertise in and around the national park. Private cars have a seating capacity from 4 to 45. They are available at 83 Ma May Street.

Shuttle Buses: Shuttle buses are none other than Tourist Buses. They are running under the same company of Mr. Linh’s adventures. These buses depart from Hanoi at 83 Ma May Street around 0730 and return at 1300 hrs from Ba Be Tourism centre.

Local Buses:From Hanoi, we can reach the park in the following ways

(Note: The travel route may vary depending upon the local conditions)

In order to enjoy the sceneries offered by this place to the fullest, you have to know the best time to visit. We recommend the national park and the lake to be visited during the dry season (winter and spring). January to September is the best period to visit these places.

The monsoon season (wet season) is better avoided because the Nang River, from which the lake gets water form, gets flooded during the monsoon. The monsoon season is from October to December. If you want to relish the culture of the tribes, visit this place during the Long Tong Festival.

1.The location around the national park is still under developed so you cannot expect swanky restaurants and hotels for accommodation.

2.The roads that lead to this place are very poor so make sure to drive very carefully through this terrain.

3.While boarding the bus to Ba Be from Hanoi make sure that you board the bus suggested in this article as there are several cars and buses parked at Hanoi bus stand proclaiming that it is going to Ba Be directly and will request you to board on theirs. But they won’t go directly to the tourism center instead they will drop you off 20 km before the place and you will have to catch another bus to reach over there. So when they ask you to board on kindly say “Khong, cam on” which means “No! Thank you” in Vietnamese.

4.Avoid visiting this place in the wet season as frequent flooding happens in the lake. 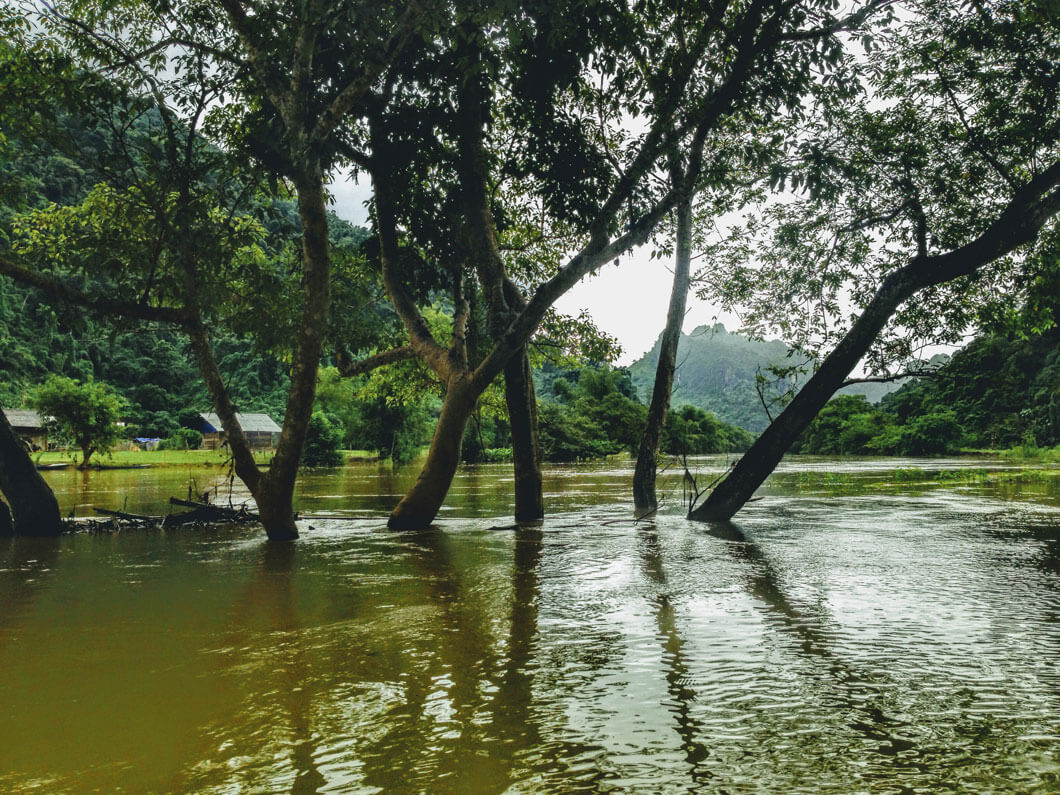 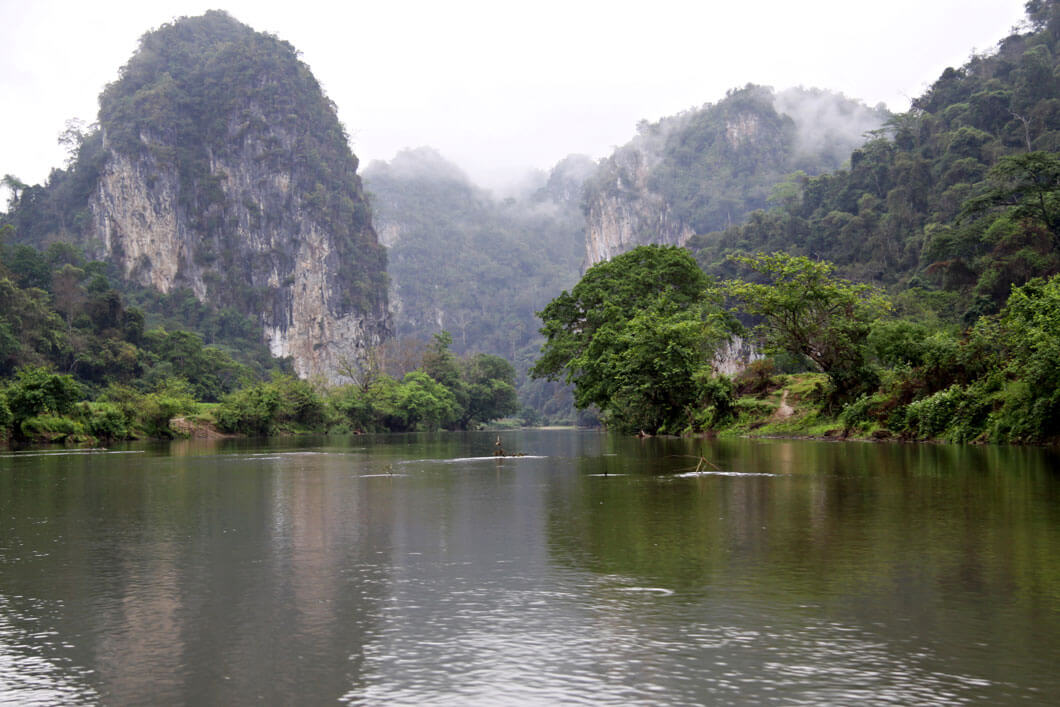 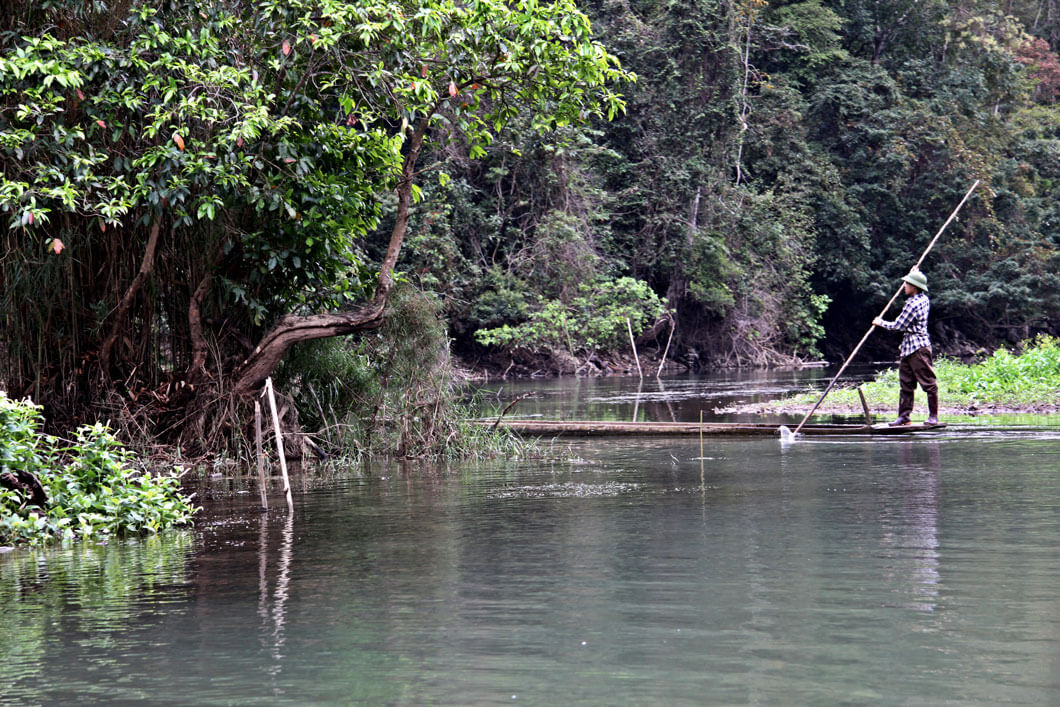 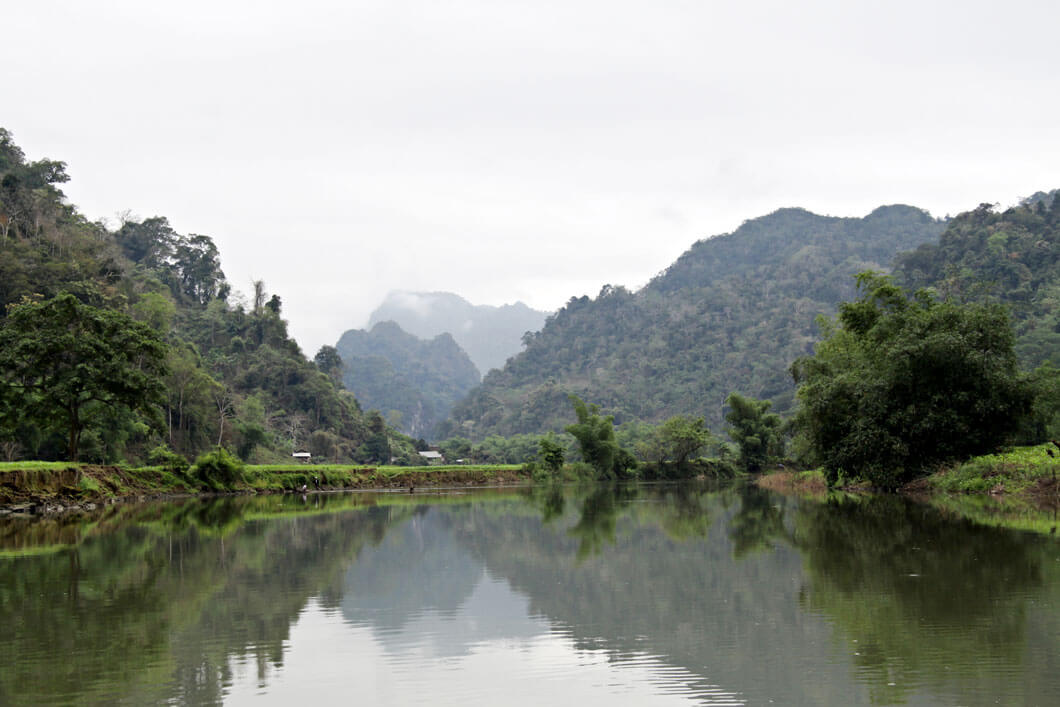 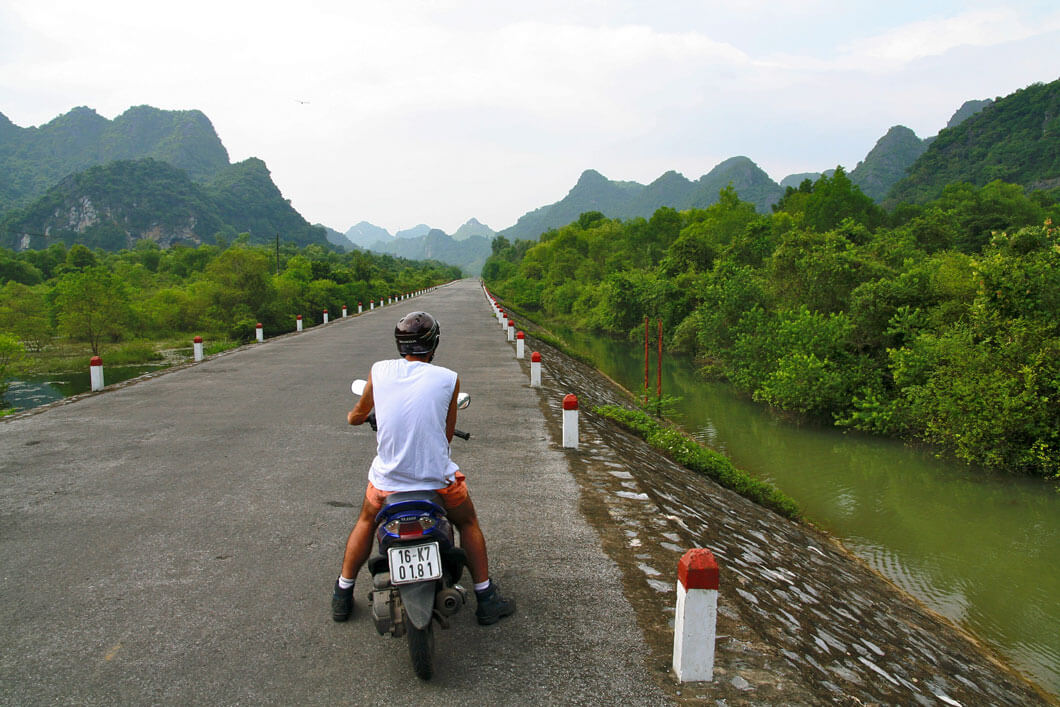 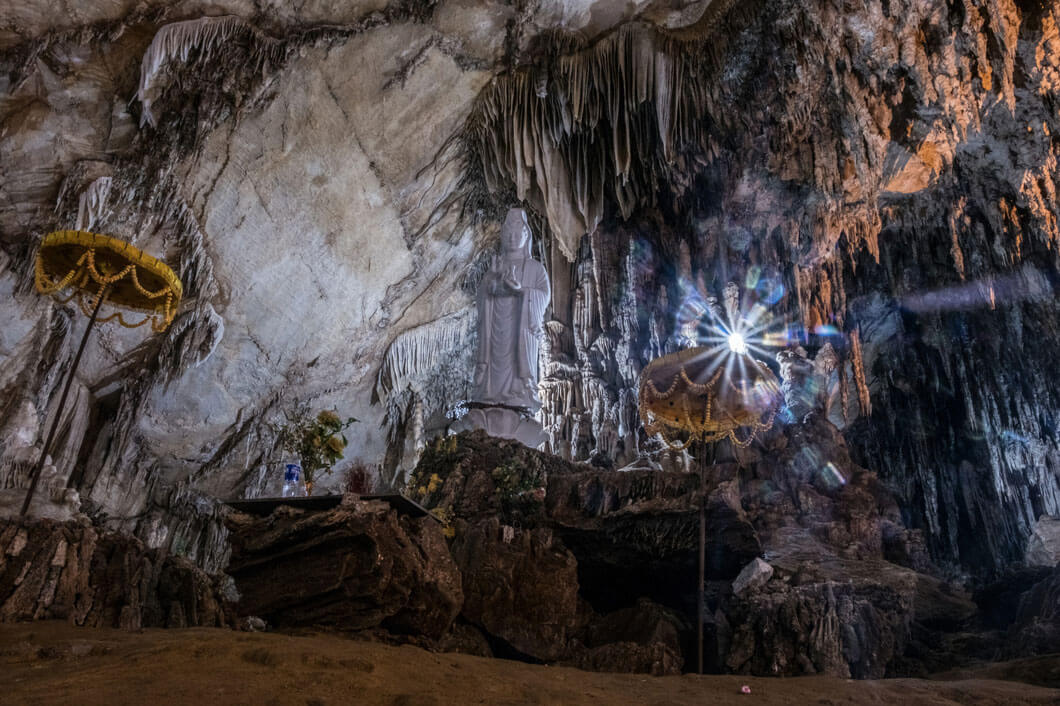 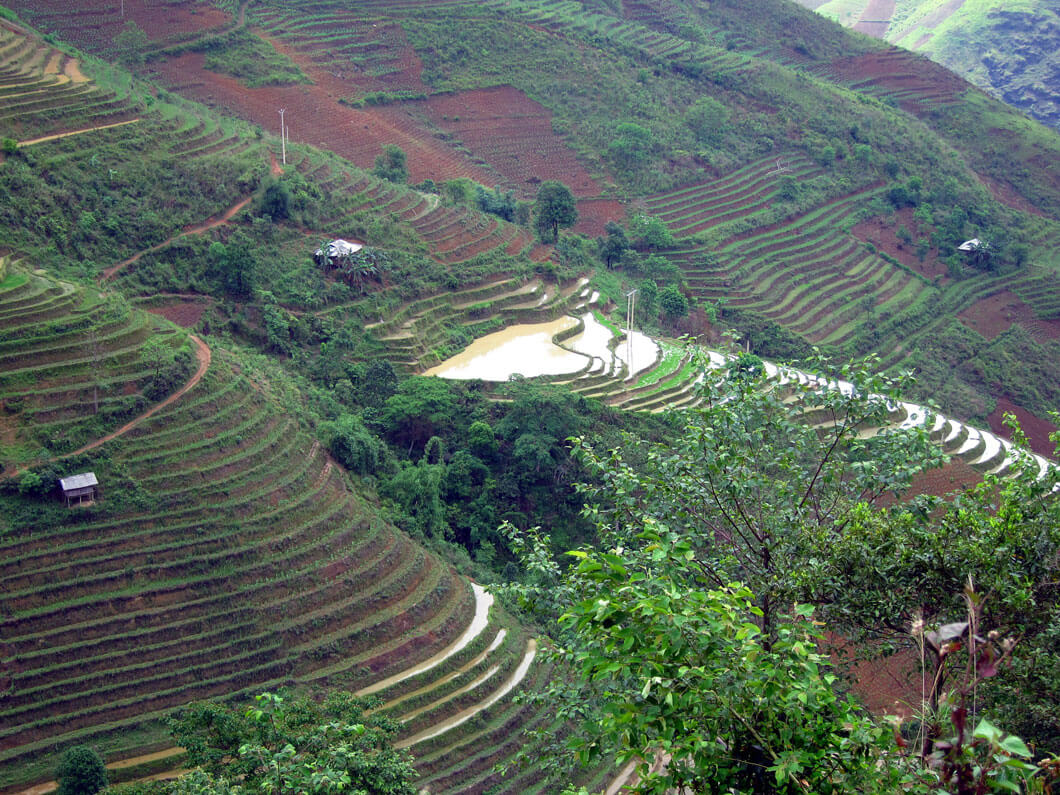 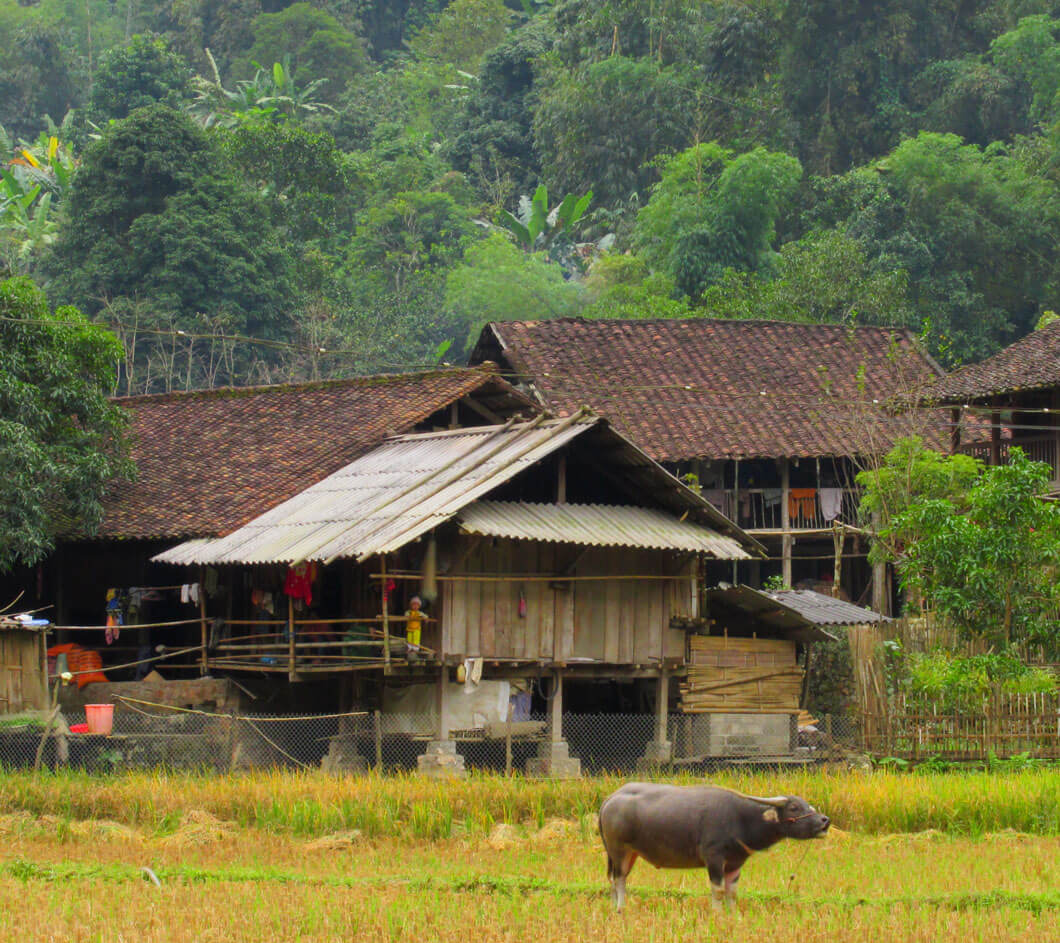 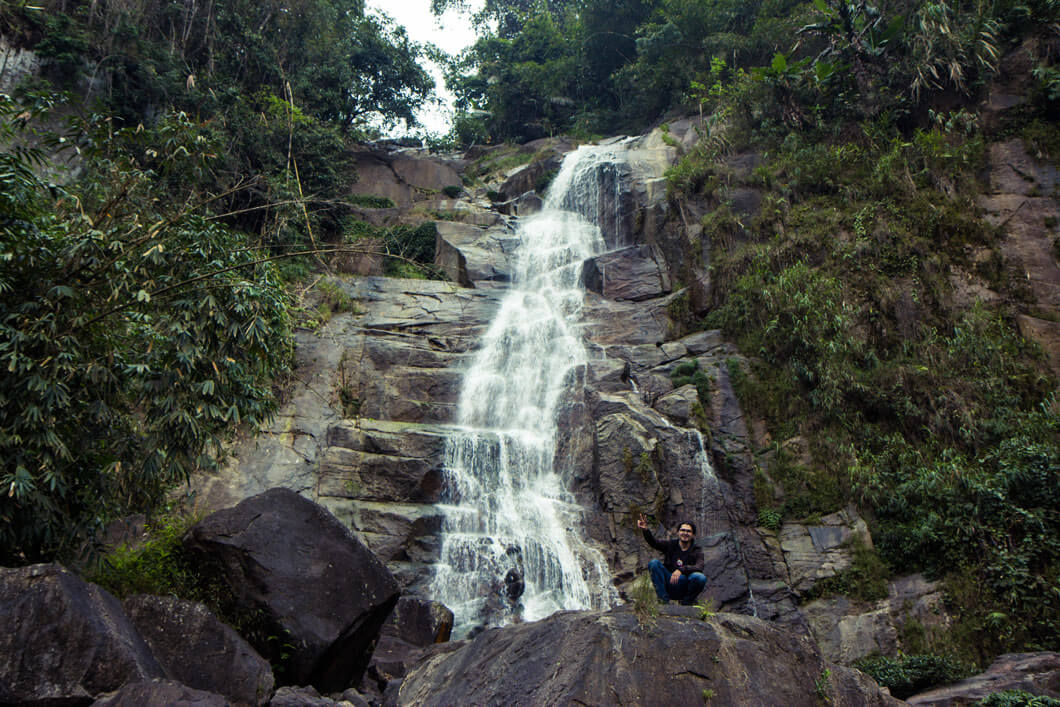