1. Why Heerlen Is famous for tourist Place ?

Here, there are so many exciting things to do if you want to come and unwind, even with your family. The historical sites and cultural attraction have a lot to write home about. This is one of the few cities you can explore uncountable numbers of local attractions.

You are sure of discovering new places and uncommon things that will remain evergreen in your memory. The amazing sights in this city surely offer travelers value for their money without spending fortune. Your stay in here will always be a worthwhile experience because the dwellers love visitors, helpful and hospitable.

Some highlights of many things awaiting you include: Best wat te doen in Heerlen and its environs, places to eat and drink, many adventurous and excitement activities to do, attractive natural attractions as well as topmost historical structures.

2. Geographical description & the beauty Of Heerlen

Heerlen Netherlands is attractive city and administrative district strategically located in the southern part of Netherlands. It is also reputed as the third most populous settlement under Limburg province.

It may interest you to know that this remarkable city is an integral part of the city region of Parkstad Limburg, a conglomerate of almost 250,000 dwellers comprises of 8 area councils.Heerlen Netherlands city is ranked among several numbers of the best architecturally vital buildings for 20th century.

Even though city is not all that industrial but virtually all travelers testify that it has a lot to offer. Talk of its glittering castles and gardens, the delicious and mouth watering food coupled with friendly and hospitable dwellers.

Archaeological research had reliably established that this town was initially located about 5000 years back. Aside from this, there is hardly any information about them until after the Romans settled and formed formidable army operation base. The name Heerlen came up in 11th century when going through some chapels and lands gifts.

This used to be the case anytime a new Bishops is enthroned. Shortly, it changed hands to Ahr-Hochstade counts that set up the church of St-Pancratius building and a castle with a moat.Dukes of Brabent ruled in the middle of 13th century before it was finally separated from Hoensbrook in 1388.

On many occasion during the 80 years of war, it was ruled by the Dutch Protestants and the Spanish at one time or the other. In treaty of 1661, this country become an integral of Dutch Republic even though, it was nearest to Spain border for comfort.

The French effectively took over towards the end of 18th century and made Heerlen Limburg in 1814. It supported Belgium in the revolution and defeated. After 9 years, it became part of Netherlands. After some time, the city grew and became fully established in agricultural produce until 1900.

4. Top Things to do in Heerlen

7. How to reach Heerlen & how much it costs:

Four stations are strategically located in here but the busiest one is at the heart of the city. Heerlen Holland itself is centrally established making it easier to link up with.

Train : There is hourly movement of train from Aachen Hbf with very suitable onward trip from there. If you are coming from Schiphol Airport or Armsterdam, simply join the train to Utrecht.

From there, proceed to platform 15 and then enter the Den bosch train and alight at the city. The trains move at half an hour interval while the entire journey is about 2 hours, 30 minutes.

Bus : Interestingly, International bus operates to and fro the city directly stationed behind the train station. Arriving at respective destination should be easier for all travelers since so many buses ply their trade in here.

The bus station has been very helpful to visitors so desired. Do not forget that you could be asked to use Chipcaart to pay the public transport. All you need to do is to load up your purchased card with credit card. Thereafter, normal fare will always be deducted automatically anytime you travel.

Car : Car travel to this place is optional to all travelers. If you choose to go by car, then you must enter at A76. Since the road does not have any junction leading to destination, it means you have to enter N281. Meanwhile, those who take off en route Maastricht are expected take  A79 as goes directly to the city.

As good as car travel is, it is not advisable. This is because parking space is very inadequate, leading to congestion and astronomical high fee. You are advised to leave your car behind and hire bicycle if your mission is to travel within the city. They are cheaper easier and safer.

Air Flight : Air flight form Maastricht to Aachen Airport is around 15km from the city. Since Eindhoven is reputed for more effective transport link with the city, it is generally advised that you fly directly to Eindhoven.

On the other hand, those whose arrival is scheduled for International flight are encouraged to fly straight to Amsterdam Shiphol. Within about two and a half hours to the place.

It is very important to know the right time to enjoy your visit to this attractive place and then consider what to do in there. No tourist should underrate the climatic conditions in Heerlen city such as temperature, humidity, rainfall and snowfall.

This will enable you to plan your move. The weather condition of this place in September is within range of 8 and 15 degree centigrade (temperature). The level of humidity is around zero percent. In October, the temperature ranges from 5 to 25 degree centigrade. The seasonal average rainfall is:

While the seasonal average temperature are:

[…] 2. Heerlen: The city of Heerlen is located in the south-east of the Netherlands and is one of the famous tourist places in the country. This city was ruled by Roman emperors, and it… Read more » 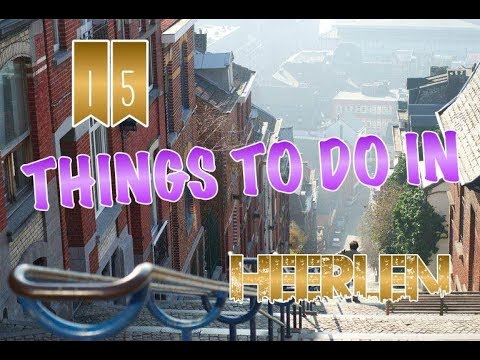